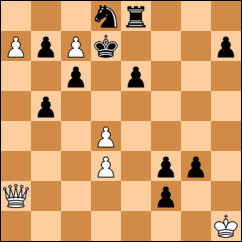 12. Qxg3+ Kb6 Black King obviously couldn’t capture the mad Queen, or it would have followed promotion in a8 with check, with consequent sacrifice and draw for stalemate. Thanks to this, White Queen was activated and now successfully captured one of the enemy pawns. But what do to now?

Nearly the same position as in the thematic try, but now white Queen can immediately guard the 1st rank, so the black pawn cannot be pushed furthermore.

Note: Every variation has been deeply tested with Stockfish 12 – 64 bit version, with 5-men tablebase installed.

AUTHOR NOTE: This is an improvement of my study published on 13° International Tournament UAPA (2020). An introduction was added and a slightly different configuration allows better development of thematic play.